Over the last few months I have had baseball fever so I decided to try my hand at creating some custom cards. It's an idea that I have toyed around with for a while, but I have never gotten around to doing it. I think it was mostly because I didn't have any decent photos that I had personally taken (didn't want to use photos taken by others), but over the last season I took my camera to some games and ended up with a decent number of cool shots (in my opinion anyway). After all, what is the purpose of having thousands of dollars invested in cameras and lenses and taking them to games if you don't do something with photos? So, I pulled out some photos that I took during some of last season's games and tried my hand at making some cards.

I decided to start with photos of some of the foreign players that I had taken for a couple of reasons:

1st: Korean card companies don't produce cards with the foreign players on them.

2nd: Most of my photos from the season are of the foreign players because I like to share them on Twitter so people back in the states.

Anyway, the 1st player that I ever made a card for was Jared Hoying of the Hanwha Eagles. The photo that I used was one of him greeting the fans at Hanwha's home stadium on Sept. 22, 2018. I really loved this photo because I think it shows the type of person that Jared is and I love candid shots of players, especially when the sun is at the right angle to get some cool shadows. So, now that you have made it this far, you may as well get a look at the card that I made. 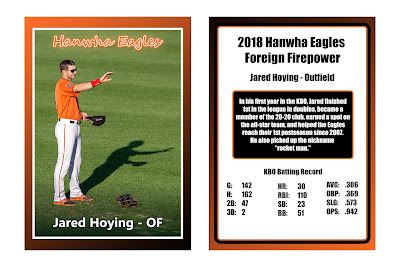 Just in case you're curious, Jared is back with the Eagles for a 2nd season after a spectacular 1st KBO season in which he batted .306, hit 47 doubles, 30 HRs, and stole 23 bases. For your viewing pleasure here is a YouTube video of fans and cheerleaders cheering for Jared last season.


I hope you enjoyed the post and I will post some others that I have made in the near future. Cheers!
Posted by kbocollections at 12:01 PM No comments:

Back in 2017, I bought my 1st boxes of NPB cards. I wasn't really sure what I was getting and I wasn't very familiar with most NPB players. Anyway, one of the boxes that I bought was a 2012 BBM Suntory Dream Match box. I picked it up for a fairly cheap price and I thought that it looked interesting. What was inside blew me away once I realized who the autographed card was. It was Isao Harimoto or Jang Hun as he is known in Korea.

Harimoto is a retired NPB player that is an ethnic Korean. He was born in Hiroshima, Japan in 1940. He remains a Korean citizen, but adopted a Japanese name and has spent his life as a resident of Japan. Having been born in Hiroshima and growing up there, his family was a victim of the atomic bombing that happened there in 1945. While he survived the bombing without injuries, he did lose a sister that was in the blast zone. He is also identified as the only Hiroshima bombing survivor to play professional baseball in Japan.

As a professional player in the NPB, Harimoto went on to become a legend. He debuted in the NPB in 1959 at the age on 18 with the Toei Flyers and continued to play until 1981 when he retired from baseball as a member of the Lotte Orions. Over his career he earned Pacific League Rookie of the Year honors, was and 18 time all-star pick, and a 7 time batting champ. He also holds the NPB career hits record with 3,085 hits. In 1990 he was inducted into the Japanese Baseball Hall of Fame.

Listed below are some of his NPB final numbers.

I hope you enjoyed this post and I will try to get on here more regularly in the future. Cheers!
Posted by kbocollections at 12:13 PM No comments: